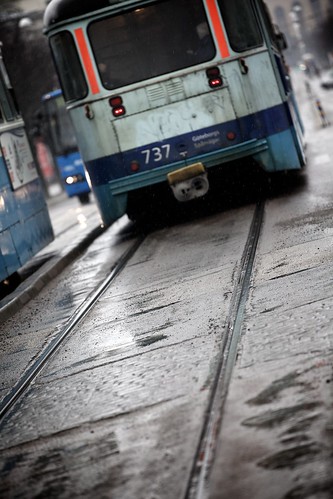 It was raining, correction, drizzling outside the hotel Gothia Towers at 0500 Wednesday morning. The Scandinavian Developer Conference ended the previous night with great success. If it wasn't for the sheer exhaustion I probably would have been more reflective of the past few days, all the interesting people I've met, old friends and new. As with my recent trips, camera is in hand and ready for capturing an exposure. Every shot taken brings me to a new level of understanding about the camera as an extension of my vision and how I see the world.

The bus trip and plane to Amsterdam were as memorable as the morning commute.

Everything except for the passenger on the plane who walked up to the First Class curtain and fainted in the aisle.

When I arrived at Schiphol I went immediately to the tourist center to plan out my reason for being in Amsterdam: Keukenhof (Massive Tulip Garden). After receiving the appropriate bus tickets for Keukenhof, and train tickets to get me to the city, I decided to board the train to Amsterdam to drop my bags off at the hotel. As I sat relaxing in my seat on the train I realized in horror, that I forgot my suitcase somewhere in the airport.

Thankfully, setting aside my panic at leaving a bag "at an airport of all places", I was able to grab the train going back to the airport within minutes to go searching for my bag. After visiting three separate areas of the airport, I finally found the customer service area that had my bag, and was happy enough to give it back after they had ransacked it looking for bad things.

So at this point, I have spent nearly the entire morning on a plane, several trains, a few trams and standing at a bus stop similar to how I started my morning. I'm tired, but nearly at my intended destination. Forgetting a bag, and losing most of the morning has not dissuaded me from my goal of photographing some flowers.

On the bus, venturing toward Keukenhof and it's literally standing room only up and down the aisles. My perspective about the day is shifting, it isn't noon yet, and I'm on the bus. While sitting there, I chat up a few people, all very friendly. Had a conversation with a beautiful portuguese woman who lives in Holland, and is visiting Keukenhof with her dad. She had the most interesting camera, very simple, something retro but I can't place the name. I'm quite sure she got some great shots with it, the photographer matters more than the camera and gear in most instances.

I was happily moving through and taking pictures as you can see from above, using a macro lens and getting some interesting exposures. Something wasn't clicking though, and I was becoming increasingly frustrated with spending all this time getting here and seeing what I thought were substandard photos. It didn't help that I was also getting quite bored of taking flower shot close ups. I decided to either leave, or change perspective.

So I decided to change perspective. And much to my surprise, a whole new picture appeared in the viewfinder. If I changed my perspective enough, the once boring and flat flower was shimmering in a beautiful blue sky background. At times the sun would kiss the edge of a petal and give a little surprise.

I'm pretty happy with the results. And all it took was to get down to the level of my subject. And it definitely gave the Dutch and other visitors to Keukenhof a bit of a laugh to see me grubbing it up in the dirt with the flowers.